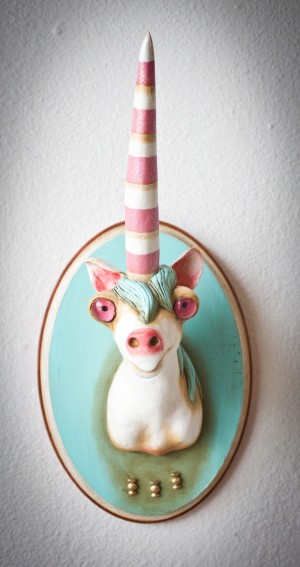 Current Exhibition at Flower Pepper Gallery: Beasts of the Unknown curated by Yetis & Friends from September 23rd to October 18th, 2017

Artist Biography:
“Valency Genis is an amazing sculpture artist that creates hybrid creatures of fancy. Valency Genis hails from the Republic of Cascadia; she entered the world as a 12-pound baby born in Portland, Oregon, and was then raised in Seattle, Washington. She was utterly obsessed with television and video games for most of her life, so it is ironic that a summer spent on Flathead Lake, Montana in an electronics-free log cabin when she was 10 years old would change her life forever. Searching for diversions to alleviate her interminable boredom, she happened upon an old taxidermy shop. A dusty pair of ‘unborn beavers’ caught her eye in the window display, and it forever imprinted on her naïve adolescent mind. The stunning array of animals presented in the rustic store drew her in with their beauty, but she was bereaved by their demise…

She describes her current living situation as ‘life in a frathouse’ as she raises her 2 teenage sons alongside her husband of 20+ years, Shane, who is a CV-22 Osprey flight engineer in the U.S. Air Force.”

Be the first to review “Jynx” Cancel reply