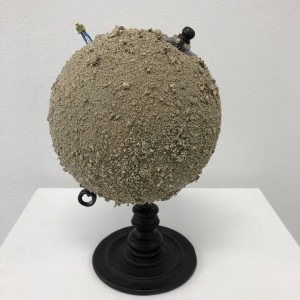 Artist Statement:
This is about wonder and amazement and confusion.

Artist Biography:
Puppetmaker and designer Amy Van Gilder’s career spans five decades. She was one of the earliest designers in the New York Muppet Workshop, hired in 1976 during the first season of The Muppet Show. She worked alongside Jim Henson in Elstree Studios, England, heading up the Muppet Workshop during the filming of The Muppet Show. She created puppets for iconic episodes including those featuring Diana Ross, Christopher Reeve and Dudley Moore, and was nominated, alongside other members of the team, for two Emmy Awards and won a Peabody Award. Van Gilder also worked as a puppet maker and designer on The Dark Crystal, The Muppets Go Hollywood, The Muppet Movie, The Great Muppet Caper, The Labyrinth and Fraggle Rock. In 1990, Van Gilder moved with her family to Los Angeles, where she worked first at the Disney Figure Finishing Department, before becoming a Walt Disney Imagineer. In 1996, she took a sabbatical from Disney to work on the TV series Muppets Tonight. Over the past 3 years, she has collaborated with the Flower Pepper Gallery on window designs. Van Gilder graduated from Rhode Island School of Design, and currently lives in Pasadena.

Amy Van Gilder has done numerous memorable special window installations for our gallery! We are truly grateful for Amy’s creativity and talent!

Be the first to review “I'll Be Darned” Cancel reply