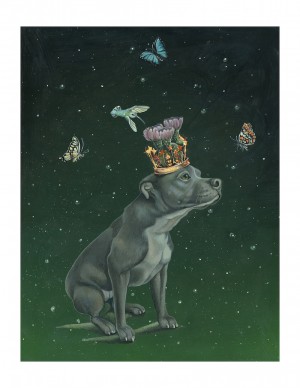 Original painting has been sold.

Queen Edwina, depicted in “Flowers That Fly”, is still waiting for her forever home. If you have ever visited the Downtown Dog Rescue kennel, you have met the Queen. She holds her court in the office. “A high maintenance diva, as beautiful as Edwina, deserves her own print series.” – DDR

Find out more about Edwina, Downtown Dog Rescue, and their other adoptable dogs at http://downtowndogrescue.org

For each print we sell, we will donate $10 to Downtown Dog Rescue. $5 from gallery share and $5 from artist share.

Inspired by my relationship with my own two rescued pit bulls, I try to present each dog as a unique individual and not just part of a “breed”. I hope that by capturing them in fantastic and playful situations people will see them in a different light, changing the perception that has long plagued them. In this series specifically, the dogs are acting in a symbiotic relationship with their wildlife companions. The dogs portrayed in this series, Gretchen, Edwina, and Precious, were all taken in by Downtown Dog Rescue. Gretchen and Precious have recently been adopted. Queen Edwina, depicted in “Flowers That Fly”, is still waiting for her forever home. Find out more about Edwina, Downtown Dog Rescue, and their other adoptable dogs at www.downtowndogrescue.org