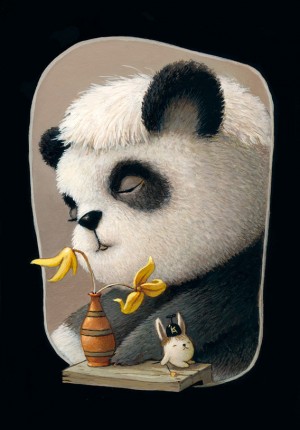 About Yoshiko by Kristian Adam:
“Kristian Adam’s piece Hoshiko captures a contemplative moment that is both peaceful and captivating. Often painting anthropomorphic animals, his characters reflect our own behaviors and habits back to us revealing the peculiarities that exist within human nature. It is Kristian’s desire to use his work to show us that mankind’s biological roots fundamentally connect us with nature and this piece is an exemplary example of that. Everything from this lovely panda’s name, meaning star, to the simple interaction with a delicate flower embodies all that can be gained when we slow down and connect with nature.” – Written by Emiko Woods for the Press Release of Being a Panda

Be the first to review “Hoshiko” Cancel reply