Tea Party for One 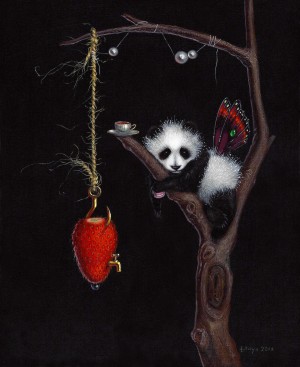 Tea Party for One

Tea Party for One by Leila Ataya

Interview for Ever Surreal with Luciano Martinez, editor of BloPop Magazine: http://www.blopopmagazine.com/featured-artist/leila-ataya/

About Tea Party for One by Leila Ataya:
“Leila Ataya’s exquisite piece Tea Party for One is a magical world with decadent symbolism. The tea party’s solo attendee, an ethereal panda bear with jeweled butterfly wings lays idly perched in a branch with everything its heart could desire within arms reach. While a panda in reality could only dream of this royal setting, this whimsical panda’s apparent satisfaction captures the spirit of the panda. Content and at times a bit lethargic after a meal, this beautiful painting portrays some of the most endearing attributes of the panda.” – Written by Emiko Woods for the Press Release of Being a Panda

Be the first to review “Tea Party for One” Cancel reply