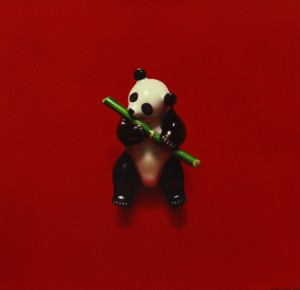 “Jason Walker’s hyper-realistic paintings observe humanities’ relationship with cultural icons and objects. He is an artist-anthropologist documenting the symbols of our collective unconscious that subtly reveal our values through the objects we cherish and delight in. In his extraordinary piece for this exhibition, Precious, he has chosen a painted ceramic panda sculpture with a bright green piece of bamboo. This object in all of its lustrous gleaming glory is something you might find in a curio shop as a totem meant to bring good luck. Set against a velvety crimson background, a known “good-luck” color in China where pandas originate, this painting centers our attention on our fascination with fortune, luck, and fate. This painting is as alluring as the principles it explores. It immediately captures the eye with its glint and glimmer and holds our gaze with its dewy perfection. The profound simplicity and high level of execution of Walker’s work allows us the opportunity to examine objects we might otherwise overlook and the part they play in our culture, beliefs, and understanding.” – by Emiko Woods for Press Release of Being a Panda

The Art of Jason Walker: Artifacts and Archetypes

Jason Walker’s imagery reflects popular culture: from Disney’s Mary Poppins or Mickey Mouse to frosted doughnuts. As observer and conveyor of cultural icons, he is an anthropologist and his beautiful and often endearing paintings resonates with art viewers. But this Toronto artist is also an analyst. Conceived with the clear-eyed vision of a native of Nairn, Scotland, Walker’s compositions challenge viewers to consider contemporary culture.

Through his iconography, Walker creates artifacts, a paint-on-canvas time capsule for future generations. His images are representational rather than abstract. His subjects from Dorothy from the Wizard of Oz to Peter Pan’s Tinker Bell are non-elitist, international, and easily identified. A portrait of our time, Walker’s renditions are intimate and lifelike, crafted with diffused edges or Old-Master chiaroscuro. Painted in Renaissance jewel-tones, his work is, like sugar, irresistible. Whether of mouth-watering Timbits or Mary Poppins and Bert, the seductive beauty of Walker’s imagery draws the viewer in.

Yet Walker’s art remains within post-modernism and, although representational, is also conceptual. His subjects are more than icons and represent archetypes, what psychologist Carl Jung describes as symbols of our collective unconscious. Dorothy’s quest for wisdom is universal, as is the helpfulness of Tinker Bell or the loyalty of Pluto. Comforting and familiar, yet symbolic, these figures elicit childhood hopes and fears. Echoing psychologist Bruno Bettleheim’s “uses of enchantment”, Walker’s iconic figures enable viewers to find their own archetypes or cultural heroes.

Through live-action figures and figurines, Walker also conveys the universality of emotions: the romantic, the tragic and the comic. Yet his humour is playful and often subtle. Frosted doughnuts evoke the realism of the 17th-century Belgian nature morte or still-life tradition. A special-effects animator for the award-winning (or Oscar-nominated) Madame Tutli-Putli, Walker employs humour to bring social concepts to life. His addition of Dolly, the sheep, to the human evolution chain encourages smiles as well as commentary. Although these compositions invite viewers to make associations, the pleasure principle prevails.

A Spoonful of Sugar, then, is more than the title of Walker’s exhibition. It is also an underlying theme that unifies both the artist’s role of communicator and image maker. A multidimensional artist working within a modern artistic code, Walker illustrates a respect for beauty and an acknowledgement of its enduring value. For this artist, beauty is not just a means to attract attention, but has power to awaken deep emotions and impart new life.

Be the first to review “Precious” Cancel reply