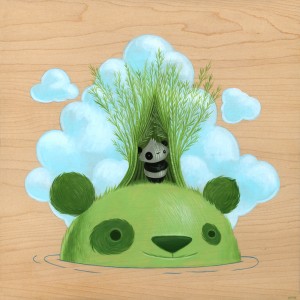 Artist Biography & Statement:
In 1992, the year after I graduated NYU Film School, I met my husband, Ed Mironiuk (aka GH-05-T). Eleven months later we started our own company, Cha-Pow! digital ink and paint, coloring animation for Coke commercials, Cartoon Network pilots and Saturday Night Live, to name a few.

In late 2005, as a hobby, I started Cuddly Rigor Mortis LLC, hand making plush dolls of my own creation. I had never sewn anything before in my life. I was lucky enough to have been included in gallery shows (Gallery 1988, Rivet Gallery, etc) and magazines and fans found me from all over the world.

But after 3 and a half years of sewing the same patterns over and over again in my spare time, I felt the need to expand my set of characters. I decided to put away my sewing machine and pick up a paintbrush. I had taught myself how to paint when I was eleven and it’s been a constant calling. No longer limited by the constraints of plush design, the range of Cuddly characters quickly grew to include food, real and imaginary animals, and charming botanicals. Again, I consider myself lucky that my paintings have been featured on top design and food blogs like Moco Loco, Super Punch and Eat Me Daily and exhibited in shows from artKitchen in Amsterdam to Gallery Nucleus in California to La Gaîté Lyrique museum in Paris.

Although my work has evolved from cute/horror to cute/creepy to just plain cute, the core of what Cuddly is stays the same.

Be the first to review “Panda Island” Cancel reply