Home / Art / Painting / Over It Study 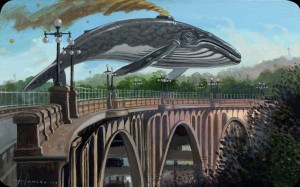 Over It Study by Roland Tamayo

Artist Biography:
In the spring of 1999, Roland Tamayo earned his BFA in Illustration from the Art Center College of Design in Pasadena, California. After enjoying a career in the video game industry as a Concept Artist, working on series such as Sony’s Ratchet And Clank and Resistance: Fall Of Man franchises, Roland now focuses on his gallery, freelance, and commission work. He enjoys combining man made objects with nature, and natures’ creatures with each other, creating playful Juxtapositions which tell stories conceived from his personal experiences since childhood, and the love and inspiration drawn from his family.

Be the first to review “Over It Study” Cancel reply