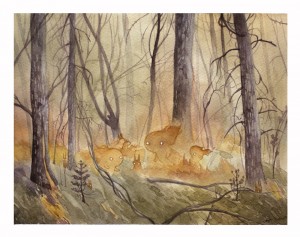 Current Exhibition at Flower Pepper Gallery: The Language of Nature from August 26th to September 20th, 2017

“Ania Tomicka creates worlds and characters that are mystifying and elusive. Inspired by emotions, music, and her own imagination there is something truly lyrical hidden in her work. Her piece Fire Spirit, captures an intimate moment of appreciation between a girl and the beauty of nature. Witnessing this peaceful scene is her curious fire spirit companion who is loyally perched along side his friend. It’s a beautiful depiction of peaceful change and transition as the warmth of their presence transforms the colors of the trees into fiery auburns and gold.” – Emiko Woods for Press Release of The Language of Nature at Flower Pepper Gallery

Be the first to review “Fire Spirits” Cancel reply