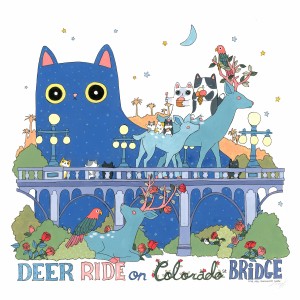 Window 2: Free Spirit by Valerie Pobjoy
(Valerie is also one of the three live painters for BoldPas)

Window 3: Welcome to My Town by Shanghee Shin

Window 4: The Anticipated Virtue of Disintegration by Ivana Quezada

Original art pieces + installation inside each of the five windows.

About Old Pasadena
Old Pasadena is the original downtown of Pasadena, home to the Tournament of Roses and located just ten miles from downtown Los Angeles. This 22-block National Register Historic District is internationally recognized as a shining example of urban renewal. Old Pasadena is one of the premiere shopping and dining destinations in the country, featuring a cosmopolitan mix of 200 retail shops and specialty boutiques, as well as 100 restaurants, cafés, and entertainment venues. This architectural gem is pedestrian friendly and provides convenient parking and easy access to public transportation, served by major bus lines and two Metro Gold Line stops.