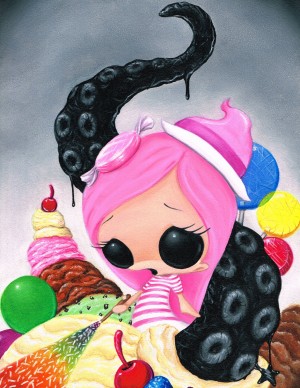 Artist Biography:
Sugar Fueled / Michael Banks is a freelance artist from Burbank, CA who specializes in pop surrealism, lowbrow oil paintings and comics filled with cute, big eyed characters and animals in colorful, candy filled scenes. Michael planted his roots as an artist over 20 years ago selling tattoo flash around the world and has since ventured in tattoos, clothing, music, street art, stencil pop art, sketch cards, children’s stories and comics that have led him to the sweet world that he resides and paints in today. Michael’s art has taken on adventures in every major city across the United States, traveling to hundreds of comic cons / conventions and art galleries from coast to coast. Michael along with his wife/manager Sarah Banks run Sugar Fueled clothing. A line based on Michael’s art and his trademark broken star that represents perseverance, set with the goal of making the world a sweeter and happier place.

Be the first to review “Always and Never” Cancel reply