With Regard To The Supposed Primary Qualities Of Extension And Solidity 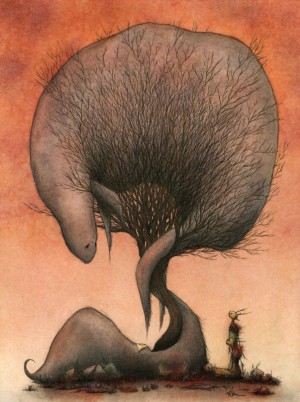 With Regard To The Supposed Primary Qualities Of Extension And Solidity

Artist Statement About This Artwork:
“With Regard To The Supposed Primary Qualities Of Extension And Solidity”

In short, this piece was inspired by a particular view of philosopher David Hume’s, in which he questions an object’s primary and secondary qualities and whether these properties are held within the mind of the observer or exist independently. In my illustration, the two observers in the lower right question the existence of the tree creature from a distance, while in turn the tree creature considers whether the observers themselves are figments of his imagination, or if they truly exist and are there to help him down from the tangled mess of branches.

Artist Statement & Biography:
In 2005 I was working at a record store in Seattle. I had been working retail ever since I dropped out of art school in the mid-nineties and after a decade of working to pay back that one year of college I was dreaming of an escape. I pretty much lived exclusively for the nightly retreats to my decrepit drafting table where I was free to spend hours hiding away in a vivid watercolor washed world surrounded by the warmth and comfort of my unusual creations. After years of existing like this I eventually gained the courage to take a chance and quit my day job to pursue my art full-time. Obsolete world is a name that was originally taken from the 1961 Twilight Zone episode “The Obsolete Man” where in a future totalitarian state, Burgess Meredith’s character (a librarian) is a man put on trial for the crime of being obsolete. I had always loved that episode and I pictured a similar scenario in which the make-believe creatures of childhood suffer a similar “crime” as one grows old. I took to the task of conserving these victims of consequence and created “Obsolete World” as a place where my own creations could safely while away the hours.
-Jeannie Lynn Paske

Jeannie Lynn Paske is a self-taught artist who combines watercolor, charcoal, pastel and ink to form richly textured illustrations of thoughtful monsters and peculiar creatures. In 2006 she established “Obsolete World” as a place her various creations could call home. She is a big fan of philosophy mixed with humor, and strives to convey hope and introspection, as well as curiosity in her work. Jeannie currently resides in the Pacific Northwest.

Exhibitions:
2015
April-Solo show at Nebraska Art Gallery in Portland, OR

2012
November-Get The Lead Out IV group show at The ARTtery in Costa Mesa, CA
August-Signals End on the project wall at C.A.V.E. Gallery in Venice, CA

2007
December-Solo show at Frame Up Studios in Seattle, WA