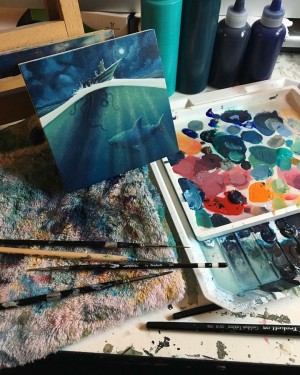 Artist Interview with Flower Pepper Gallery on Jan 3rd, 2016:
- How would you describe your own artwork?

I usually try and show someone my work rather than explain it. I feel like each person will view the piece different. They might even see something different than I am trying to portray. I would definitely say it weighs heavily on Narrative. There is an underlying story to each painting and I try and create that environment and/or world in each piece.

- Is there a story behind this painting?

This painting is definitely part of the world these creatures live in. It deals with danger, but at the same time there is a guardian in the piece. I like each piece to require a bit of inspection. The whole “not what meets the eye” is something I am often putting in my pieces. I feel if a painting can surprise you more than once or make you feel differently at the end than you did originally, then it’s doing it’s job.

This piece came from a digital sketch I did many years ago, I really like the story it tells. It’s one of those ideas that got buried and forgotten. But when looking through old ideas I remember it being inspired by “the lone wolf”. More or less the idea of doing it on your own.

It really varies from piece to piece. I am not one of those people that has 100% of a painting planned out. I need spontaneity when I paint, or else I get bored before I start. But for the most part it comes from a few revised sketches and goes on the canvas/panel as mostly vague line work. I do use a lot of environment references photos and incorporate different skies, oceans, etc. that I like. I have a secret Pinterest board full of good inspiration, I’ll even use friends Instagram photos.

Greg Simkins will always be my favorite because he’s a good friend and has been a mentor of mine for many years. I would feel very fortunate to be half the man and artist he is.

My favorite beer is Grapefruit Skulpin.

I wanted to be a cartoonist when I was very young but I got distracted with sports, the beach and skating. Then when I got to college I realized I wasn’t very good after I declared myself an art major. It was an uphill climb to make up for a lot of lost years not drawing. But I’ve had some great mentors along the way.

Coffee in the day, Tea at night

Be the first to review “Travel Light” Cancel reply