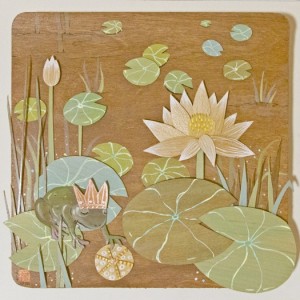 Inspired by the tale of The Frog Prince

JEYA is an illustrator experiments with a wide range of materials and mediums. Born in Taipei, raised on a staple of fruit tarts and other sweets, she currently resides in Los Angeles with her ‘magical headphones’. While not making stuff, she likes to bake sweets and treats for fun.

3 Pins on A Map Oct 2009 3-person show at Compound Gallery, Portland OR

Everyone In Together June 2008 Gallery1988 SF, San Francisco CA

Be the first to review “The Frog Prince” Cancel reply