The Consensus Amongst The Imperiled

Home / Art / Original Art / The Consensus Amongst The Imperiled 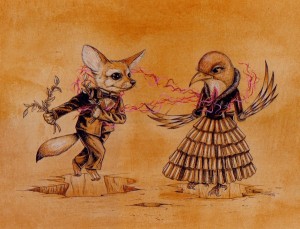 The Consensus Amongst The Imperiled

Piece Info:
This piece deals with the preservation of not only endangered species, but preservation of life in general. We all do what we must to protect ourselves and the lives of our loved ones, and in this case the Bleeding Heart Pigeon is extending her love and energy to keep herself and the Fennec Fox out of the void and safe from extinction. I couldn’t pass up the opportunity to portray two magnificent and beautiful creatures at a time when it coincides with what is going on in the human world with our never-ending fight to preserve life and our rights.

Artist Biography:
Christopher Umana is a Southern California native now residing in Northern Nevada. His work depicts the human condition as represented through anthropomorphic figures. His pieces have been described as “one frame movies” that show the connections between humans, animals and insects, flora and fauna. He draws inspiration from the similarities in social behavior between man and animal, and he focuses on personal topics such as life and death in correlation to different cultural reactions and superstitions related to these subjects. He combines loose and organic backgrounds with tightly rendered characters which is a tribute to both the comic artists he admired growing up, and the primitive feelings he remembers from preschool finger-painting.

Umana has shown extensively in galleries and museums across the United States and Europe and is in private collections worldwide. His work has been recognized by American Illustration and Society of Illustrators Los Angeles, and his work has been seen in a variety of media from Paramount/Insurge Pictures websites, covers of the Los Angeles Journal, and a recent album cover for critically acclaimed electronic musician, Venetian Snares. He was one of the featured artists in the Lowbrow Tarot Project. He also has participated in many benefit and charity shows including the Japanese and American Red Cross, Los Angeles Downtown Dog Rescue, Busted Foundation, the Oceanic Awareness Collaboration, Art Hatch, the Sea Shepherd Conservation Society, most recently Lions, Tigers, and Bears: A Big Cat & Exotic Animal Rescue.