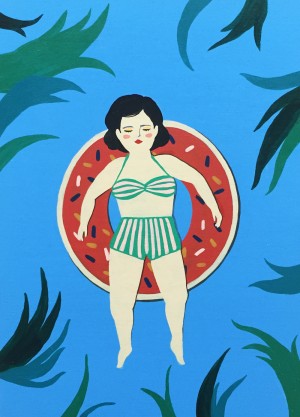 Artist Biography:
Yejin Oh is an illustrator who immigrated from Seoul to Los Angeles at the age of 19. Having been immersed in both the busy city life of Seoul and the natural and spacious beauty of the LA suburbs, she finds inspirations for her artwork from these two very different living environments. After graduating from Art Center College of Design in Pasadena, CA with a BFA in Illustration, she is pursuing to work as a freelance illustrator and artist.

Be the first to review “Summer Dream” Cancel reply