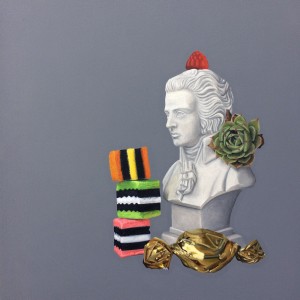 Artist Biography:
Chelsea is an Australian artist, from Barwon Heads. Her delicately detailed works often explore themes around society and the environment.

Chelsea grew up in a small rural community in Australia, later moving to Melbourne to study painting and sculpture. Her love has always been for painting and she has had a varied creative career: working in a sculptor’s studio for a period of time, the art department in the film & television industry and in graphic design before having kids, which she now juggles whilst creating her art in the coastal town of Barwon Heads.

2012
– Several group exhibitions, here and there.

Be the first to review “Still Life with Succulent” Cancel reply