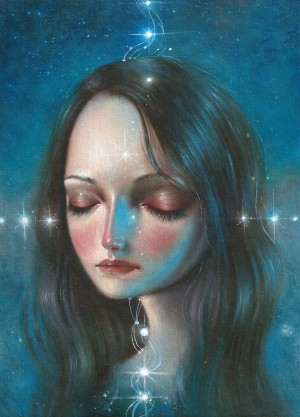 Somewhere Else by Ania Tomicka

Artist Interview with Flower Pepper Gallery on January 2nd, 2016:
- How would you describe your own artwork?

Melancholic images of characters searching for answers about life and everything.

- What kinds of things inspire your work?

I usually get my inspiration from my own feelings but I also watch a lot of documentaries and I like to read, so often it’s a combination of both.

I start with an idea that I usually develop on my sketchbook helping myself with photo references to get more inspired. Then I make the final drawing on Photoshop, so I can modify easily the things that aren’t good enough; I am talking about the characters, because the background and any other elements, are created during the painting process. I like to see how each of my paintings changes during the progress and I like to think that each one have its own life and will.

In this particular moment I have three hudge inspirations: Agostino Arrivabene, Roberto Ferri and James Jean.

- What’s the one thing we should know about you?

I am extremely shy and I am struggling with human interaction. But last year I’ve decided to fight back my monsters and I am slowly feeling better. Painting helps a lot and this is why I love it even more.

Be the first to review “Somewhere Else” Cancel reply