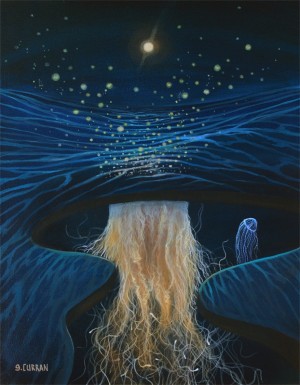 Artist Statement of these six pieces for Life And Love:
“This exhibition is about companionship. This year I made the biggest step of my life in getting married. This step in my life reminds me of how two people can balance each other and bring out the best in one and other. Often I imagine setting’s in which creatures co exist that wouldn’t likely do so. I have been inspired by the animals that actually live and work together. Whether it’s playing together or hunting food.

In this exhibition, I wanted to take the smallest of creatures who contain an enormous amount of strength and compassion. They give guidance, loyalty and focus for their companions. These paintings are a tribute to my wife.”

Be the first to review “Rebirth” Cancel reply