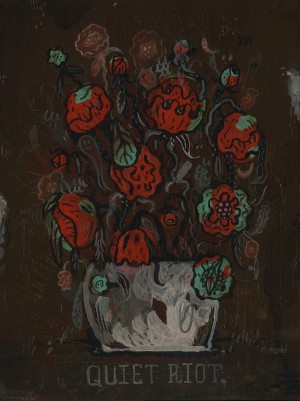 Current Exhibition at Flower Pepper Gallery: The Power of 3 from May 23rd to June 23rd, 2015

Mark Todd is also the curator for the current exhibition, The Power of 3. He successfully curated 40 x 400 at Flower Pepper Gallery from January 10th to February 3rd, 2015.

Mark Todd’s work has appeared in books, on products and in countless publications such as The New York Times, Entertainment Weekly, and McSweeney’s. His latest picture book, Food Trucks! was released this Spring from Houghton Mifflin Harcourt and is available everywhere. Under the name Funchicken, Mark, and his wife and fellow artist, Esther Pearl Watson, have co-written and illustrated a series of zines and books including Whatcha’ Mean, What’s A Zine?, a guide to producing zines and mini-comics. Mark and Esther Pearl are also the curators behind the Post-It Show, held annually at GR2 in Los Angeles, CA.

Artist Statement and Biography:
Like many kids raised in the 70′s, Mark was influenced at an early age by Star Wars and comic books. Unlike many kids, he grew up just a few miles from the Vegas strip, it’s neon and glitz looming over the city. He graduated with honors from Art Center College of Design in Pasadena, California and currently lives and works in the Los Angeles area with his wife, artist Esther Pearl Watson, their daughter Lili and Mr. Pickles, a lovely French Bulldog.

Be the first to review “Quiet Riot” Cancel reply