Please Keep Your Happiness to Yourself

Home / Art / Original Art / Please Keep Your Happiness to Yourself 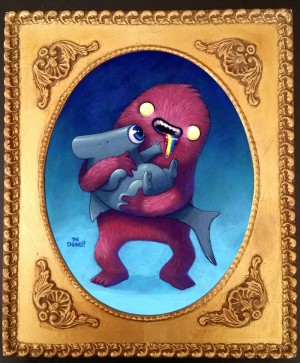 Please Keep Your Happiness to Yourself

Please Keep Your Happiness to Yourself by David Chung

Artist Statement about this piece:
This piece features a Happiness Vampire, a reoccurring creature that I’ve been using in my work lately. The Happiness Vampires do as their name suggests and suck all of the happiness out of others in order to feed. If the only source of food they have available is sad, depressed, or just wants to be left alone, they’ll do anything they can to cheer them up for their own selfish needs. The spread of their cheer and joy is more of a disease than a benefit to society. Although this piece deals with deeper issues than it seems, on the surface it was mainly inspired by my relationship with my dog. She hates that she provides me with so much happiness.