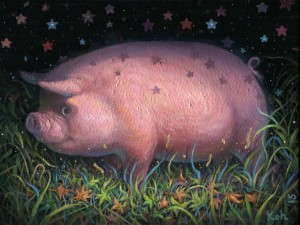 Participating artist with our booth KiSung Koh has been mentioned in: Walt Morton’s Picks: The Best Paintings at the LA Art Show, 2016 by John Seed on 01/31/16:

Participating artist with our booth Mandy Chao has been mentioned in the same article as well:

“Fairytale magic realism meets surrealism. Many attempt this innocence, she’s got it.”

“Documentary and gritty, this smells like the real deal. One of the best paintings of a dirty sink I have ever seen. We’ve all been in this bathroom, alas.”

Artist Interview with Flower Pepper Gallery on Jan 2nd, 2016:
- How would you describe your own artwork?

I used to describe my works as spiritual, whimsical, mysterious, or magical because I am inspired by the “images” from my childhood memories that I think you can’t explain all the old memories clearly, but could visualize them. My previous series represented all the memories and how I used to think of “Nature”. These days, I put more of my daily life such as my emotions, daily dreams and even relationships between the worlds into my pieces. Of course, I can’t say every single piece I have made has all fancy meanings behind the piece, but there is always a reason, that’s how I was taught from my mentor.

There is not certain creative process for me I think. I get inspirations from documentary videos, photos, my dog who must be another animal in another life, a cat who is always chilling across from my place, my dream, music, etc. I would start creating unclear image in my head from the inspiration, then I would do some sketches, after I get final image, I will start working on the painting.

Be the first to review “Piggie Dream” Cancel reply