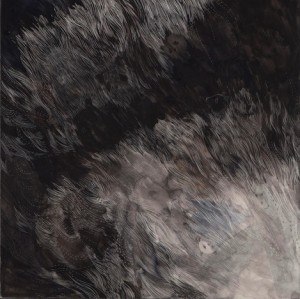 Artist Biography:
Yevgeniya Mikhailik’s work deals with human experiences portrayed through animals and the relationships that arise from interactions with nature and other species. Within the narratives, she ties in themes from Russian folklore and draws on nostalgia and her own experiences growing up among time-worn architecture, forests and rural landscapes. She was born in Tomsk, Russia in 1987. Her family relocated to the United States when she was 13 years old. She graduated from California State University, Long Beach with BFA in 2009 and MFA in 2013. She recently took on a major curatorial position with Irvine Fine Arts Center as Art Exhibition and Education Specialist.

Artist Statement:
“My work focuses on relationships between people, places and objects and how these relationships affect our lives and shape our personalities. Being no stranger to constant relocation has affected the way I relate to spaces that I have inhabited and places that were at one point dear to me. I treasure the memories of those places almost as if they were memories of people, and in my work, depict them as such. Ghosts of past residences linger inside glass jars, while uninhabited landscapes become like intimate portraits. They are at once musical and still, and, like memories, fragmented and whole, alive and preserved.” – Yevgeniya Mikhailik

Be the first to review “Panda Ghosts” Cancel reply