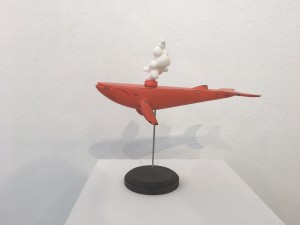 12″ long, Detachable Magnetic Bubbles, Made with Resin and Acrylic Paint

Artistic Inspiration:
Ruel had his first slow Persistence of Vision at the Van Eaton Galleries in February 2011. The concept behind Persistence of Vision is eloquent in its simplicity. What is poetic about the use of the term “Persistence” is that it does not only evoke tenacity and endurance but it also means continuance of an effect after the removal of its cause. All art with real impact would lend itself to this definition. Ruel achieves this by what drives him; his two worlds of Art and Family. He once thought that these separate lives drifted in-parallel like infinite rays, but his latest work now demonstrates that these worlds are twisting and converging into a double helix. The inspiration that feeds his genesis well of imagination, from his daughters, wife, friends, and family to daydreams and heartbreak, all find their ways intermeshed on canvas like ivy up a brick wall…

The word “Vision” is more abstract as it is not the standard definition of simply looking at an object. Yet it goes beyond the idea of just having a very keen mind’s eye. When Ruel puts brush to canvas, he sees the future. He sees the universe before him and he can control it at will. With the flick of his wrist he can unfold reality and make our world a brighter place. He is a Vision dealer, and this show at Van Eaton Galleries allows you to sample the worlds derived from his seemingly limitless Vision.

Artist Biography:
Ruel Pascual has been an artist for over 20 years. He has spent the last 10 years working in the animation industry, but his love of painting is what he holds most dear. He takes a personal approach to his work, using life’s hardships as his muse. His idea is to achieve beauty through narratives by painting familiar landscapes that portray simple life experiences. Ruel fosters his art as if it were a living breathing extension of who he is and the life journey we all share.

In addition to participating in numerous group shows in the Los Angeles area, his most recent animation projects include WB Looney Tunes Shorts, Kung Fu Panda Secrets of the Furious Five, and Double Fine’s Stacking, Costume Quest and Brutal Legend.

Be the first to review “Orange Whale” Cancel reply