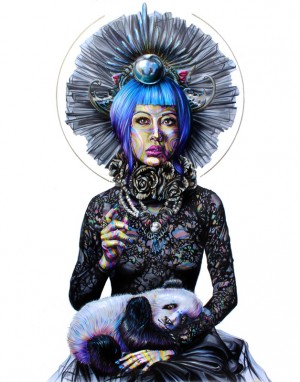 Artist Biography:
Joshua Roman is a California Based Fine artist and illustrator.
His distinct colorful works have been shown in galleries around the country. His use of vibrant rainbow lines and shapes as well as playful creatures often contrast the eerie and sometimes sensual subject matter of his pieces. His portraits are unique and original while still capturing the essence of the subject.

Be the first to review “Nurture” Cancel reply