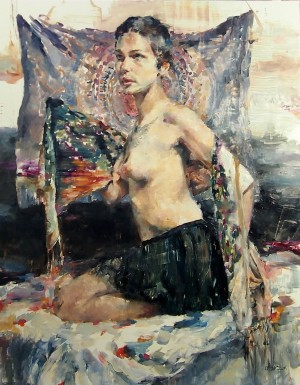 Artist Interview with Flower Pepper Gallery on Jan 10th, 2016:
- How would you describe your own artwork?

- Is there a story behind the painting?

I wanted to paint something that speaks to the feelings of renewal and hope that come at the start of a new year. “Light as a Feather” refers to the cyclical pattern and stages we go through when something ends and something else begins, as we feel a heavy weight being lifted.

“Mandala” has to do with focus and direction, which I’ve learned this year is something I can harness well. I guess this was my way of celebrating that new discovery.

My inspiration changes everyday as my experiences change, but I always attempt to capture the moments or feelings accompanying those experiences as we stumble through life’s challenges and gifts.

Even though I always start with an idea in mind, I don’t often plan every detail of a painting. My original idea can change or evolve and new ideas always find their way into each piece. Once I know the general layout I will usually photograph my model and takes tons of photos. With the layout and photos ready, I am able to start.

That is a tough question! I love any artist who isn’t afraid to change, and who is always surprising you.

I have a soft spot for animals in need and I love my rescue cat and two birds.

I was always drawing as a child, but I never thought being an artist was a job option. So, for a short period I wanted to be an attorney, probably because someone told me I liked to argue, then once I realized that I analyze everything, I wanted to be a psychologist and was even taking steps to study it in college. That was right before I started immersing myself in painting.

Be the first to review “Mandala” Cancel reply