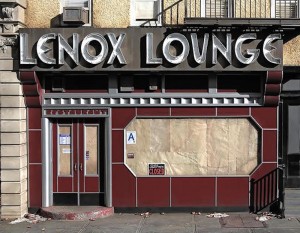 Lenox Lounge, opened in the 1940’s and has housed the music of Miles Davis, Frank Sinatra, Billie Holiday, and John Coltrane within its historic walls. However, after a doubling of rent costs shut it down in 2013, this Harlem venue tried to move locations but a lack of investors has put a halt on any plans to re-open. In Hage’s incredible replication of the Lounge, we not only see the threat to this venue and others like it, but we see glimpses of what it used to be in all of its Art Deco glory. You can almost imagine what it would be like to walk by at night and see the light glowing from the windows and hear the inspired music of the masters wafting down the street. In this way, Hage keeps the memory and spirit of The Lenox Lounge alive and allows us to imagine an era frozen in the past.

Be the first to review “Lenox Lounge” Cancel reply