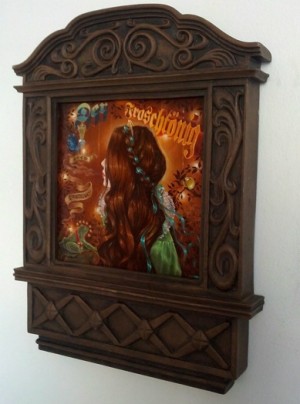 Biography:
Artist Biography and Statement:
Susanne Apgar’s artistic impulses appear to have been triggered or perhaps galvanised by a simple surrealist coffee-table art book in her childhood home. Amazed and obsessed by the peculiar images like a fur-covered cup and spoon, long legged elephants and outed inner visions, her path was set. Permission granted. Susanne was born in New Jersey and raised in Montreal. After completing a BA in Psychology she studied Illustration and Design at Dawson College followed by Fine Arts at Concordia University. She generally works in oils and is currently spending time on gallery work as well as freelancing in editorial, advertising and book illustration. Her paintings are exhibited in galleries across Canada and the U.S. She currently lives and works in Toronto.

I aim to express the meanings and emotions of what makes us human and explore how humans foolishly meddle and tamper with themselves and animals on a genetic, physical and psychological level. We persist in being human, despite tinkering dangerously with others and ourselves.

Be the first to review “Keep Promise” Cancel reply