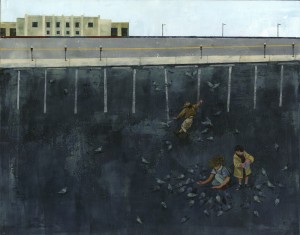 In The Morning by Sally Deng

Artist Interview with Flower Pepper Gallery on Dec 30th, 2015:
- Is there a story behind this painting?

When I was in middle and high school, I had to wake up before 6:00 every morning to catch the school bus. What I remember most about those mornings was the quietness and stillness of it all. Every thing was colored in this cool, blue light and there were always pigeons. It felt very special, being in those stirring moments before a city wakes. I took a lot of photos, albeit really bad ones, to try to capture those scenes. I guess I’m still trying to recreate that feeling.

I was three when I told my parents I was going to be a pageant queen when I grew up.

Be the first to review “In The Morning” Cancel reply