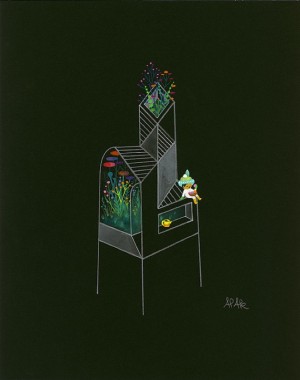 11″ x 9″ with Frame, Acrylic, Gouache and Color Pencil on Paper

Artist Biography:
Apak is Aaron & Ayumi Piland . We are a husband & wife team who create artwork together as a way exploring the beauty, mystery, and magic of life as well as expressing our love for each other. We create rich and colorful gouache/acrylic paintings featuring the utopian lives and adventures of curious little beings exploring lush fantastic environments surrounded by friendly little animals. Our goal is to bring something beautiful and meaningful into the world in hopes of inspiring us all to live simply, peacefully, and harmoniously.

Be the first to review “Enjoying” Cancel reply