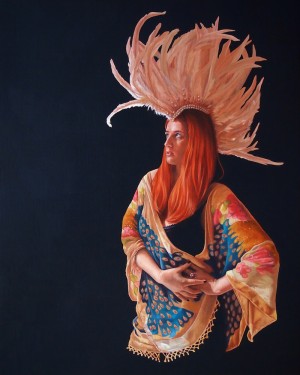 Crest Up by Chelsea Gustafsson

Artist Biography:
Chelsea grew up in a small rural community in Australia, later moving to Melbourne to study painting and sculpture. Her love has always been for painting and she has had a varied creative career: working in a sculptor’s studio for a period of time, the art department in the film & television industry and in graphic design before having kids, which she now juggles whilst creating her art in the coastal town of Barwon Heads.

2012
– Several group exhibitions, here and there.

Artist Interview with Flower Pepper Gallery on Jan 2nd, 2016:
- How would you describe your own artwork?

My paintings combine a minimalist aesthetic with detailed, realistic studies of my subjects. I give the subjects a lot of breathing space – a good dose of negative space around them. I like to explore contrasting elements, such as playing with the light for dramatic contrast. Sometimes I’ll choose a subject for it’s symbolism and then sometimes it’s just a straight up study of something I find quite beautiful, or something so ugly that it’s beautiful. Nothing’s off limits.

- Is there a story behind this painting?

This painting, Crest Up, is of local (Geelong, Aus) musician & artist Ok Sure (Akaysha). I wanted to do some figurative painting again and Akaysha has stunning features and an awesome wardrobe that influenced my decision to contact her to model for me!

The creative process usually begins for me when I’m about to nod of to sleep, or I’m walking the dog – wherever my head has a bit of space from all the daily distractions. That’s when the seed is planted and from there I might research and scribble ideas and thumbnails or just launch into setting up a subject to photograph. From the photo I draw up my image, transfer it onto the painting surface and then pain and angst over it until I’m about three quarters through – usually the point I start to have some faith in what I’m doing or bin the idea all together!

I couldn’t nail it down to just one favourite. Mark Rothko and Cy Twombly definitely rate. I’ve been lusting after Christian Rex Van Minnen and Colin Chillag’s paintings. And Dan Witz… and…

- What’s the one thing we should know about you?

I’m quite shy, and a little bit loud.

I’ll have a coffee, thanks.

Be the first to review “Crest Up” Cancel reply