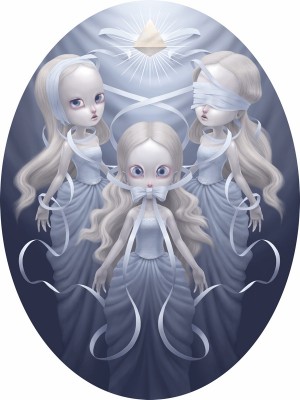 This Fine Art print is the third of a limited edition of 3 prints (hologram 038236 to 038238) signed by the artist. 2012. Released on Hahnemuhle Museum Etching 350 gsm, produced using pigmented UltraChrome K3 inks from Epson.

Certificate of Authenticity is included.

See no evil, hear no evil, and speak no evil… The pictorial maxim has been reinvented in Paolo Pedroni’s “Trinity”. These angelic figures are connected by the overarching principle of “do no evil”, otherwise known as the Japanese Golden Rule.

Artist Biography:
Paolo Pedroni was born in Brescia in May 1983 and has nurtured his passion for art since he was a kid.

The very first approach to art were Graffiti, Writing and Street Art, his media were spray colors and the walls in the outskirts.

To educate his innate talent for drawing and passion for the arts, Paolo attended the Art School “Vincenzo Foppa ” in Brescia.

Paolo competed and won first prize in a Scenic Design Contest for social theater in Brescia. Paolo later graduated at the European Institute of Design in 2005.

While working in the field of interior design, Paolo has never lost sight of the passion for drawing and painting, which led him to discover the “digital painting”, by which he began to take its first steps into the world of Pop Surrealism and to show his works in Italian and International galleries.

In 2011 Paolo tooks part in his first collective exhibitions in Italy while in 2012 he began working at graphics and design of the three volumes that tell the story of Dorothy Circus Gallery.

Neither forgetting nor denying his digital art, in 2014 Paolo rediscovers oil painting.

Be the first to review “Trinity” Cancel reply