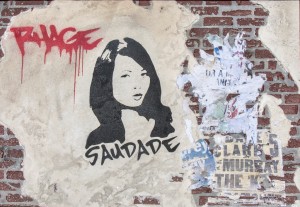 Artist Statement:
This piece is made up of miniature faux brick with a cracked plaster covering. The likeness of my friend, Hsingii Tseng, has been stenciled onto the plaster. Under her portrait is the word “Saudade.”

Saudade (sow-dodge) is a portuguese word that has no english translation. It describes an emotional state similar to nostalgia. A longing for someone or something that you are fond of that is gone or missing. It is the feeling of love that remains after someone is gone. It is the recollection of feelings, experiences, people, places or events. It brings both sad feelings and happy feelings all at the same time. Sadness for longing, and happiness for having had the experience. It embodies the yearning for things that are gone.
- R. Hage

Be the first to review “Saudade (Minuscule)” Cancel reply