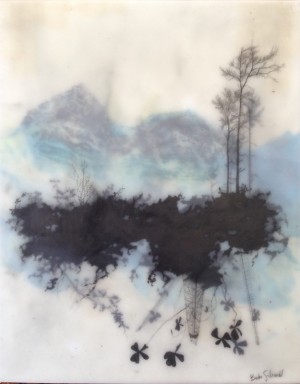 Salzwedel’s work focus landscapes that reflect the subtle friction between urban development and nature. His work evokes the fragility of our environments often giving hints of mankind’s encroachment on massive landforms such as mountains and forests as well as the animals which inhabit them. His medium of choice is a statement of this clash – graphite, a natural mineral, resin, a byproduct of plant materials, and mylar, a manufactured film. With this process by use of graphite, colored pencil, spray paint and tape on semi-transparencies and resin on panel, Salzwedel is able to accomplish ethereal artworks with a sense of depth. Salzwedel casts some of these pieces in vintage medicine tins and corroded pipe-ends, lending an intimate quality to the works. As a whole he brings these together creating a beauty and calm out of the detritus we have laid upon the earth.

Brooks Salzwedel earned his BFA Cum Laude from Art Center College of Design in 2004. Since graduating from Art Center, Salzwedel has shown at galleries throughout the East and West Coast. His work has been displayed at the Hammer Museum and MOCA, and acquired by The Houston Museum of Contemporary Art and the Portland Art Museum. He has been commissioned by Ron Herman at Fred Segal and The Four Seasons hotel in Washington DC. In addition to his fine art practice, Salzwedel is the designer and producer of an award winning line of belt buckles, featured in Los Angeles Magazine’s Best Of issue among many other publications. Brooks Salzwedel lives and works in Los Angeles, CA.

Be the first to review “Destination Alaska” Cancel reply