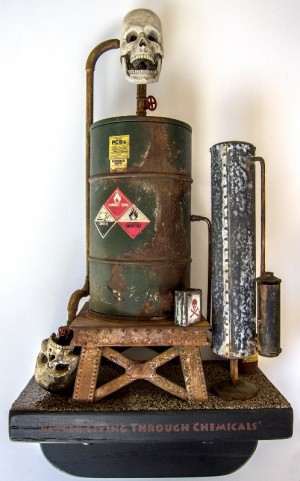 Artist Statement:
When I was young, one of my favorite rides at Disneyland was Adventure Through Inner Space. The ride took you through a journey where you would be miniaturized and then learn about the sub atomic world. The ride was sponsored by Monsanto. During that time, companies like Monsanto and DuPont were changing the world with plastics, nylon, and other chemically engineered products that were touted as modern miracles. Their slogans were, “Better Living Through Chemistry.” As time has passed, public attitudes regarding chemicals and their uses have changes. Negative effects on health and the environment due to improper use and disposal of chemicals has created great conflict between the public and large chemical users and companies. In our race toward innovation and progress, we often overlook the potential negative effects of our actions.
- R. Hage

Be the first to review “Better Living Through Chemicals” Cancel reply