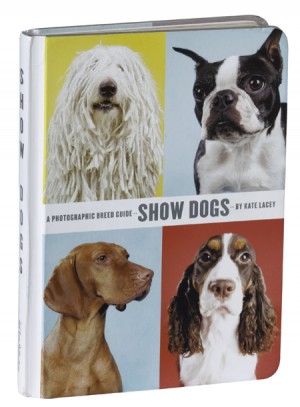 The American Kennel Club recognizes over 160 breeds of dogs in seven categories: Hound, Working, Sporting, Non-sporting, Terrier, Toy and Herding. Thousands of Americans own purebred show dogs, and year round, local kennel clubs host events at which judges evaluate how closely individual dogs conform to breed standard. Ribbons and trophies are bestowed and points are accumulated. The ultimate event in a show dog’s life is Westminster–held in New York every year since 1877–which attracts hordes of visitors and an international media bonanza. In 2005 Life magazine assigned photographer Kate Lacey to cover Westminster. She decided that instead of documenting the scene, she would rig up a seamless backdrop to make elegant portraits, much as Richard Avedon once captured glamorous celebrities. Though partial to poodle mutt mixes herself, on this assignment Kate became entranced by show dogs, and their exquisite grooming and acclimatization to attention made them ready subjects. After the assignment ended, she continued traveling to dog shows in a quest to photograph every one of the AKC-recognized breeds. Some of the dogs in Show Dogs are veterans of years of shows, some are champions and some are just puppies; but their achievements in the ring are not the point. With each portrait you’ll just see the nickname given by the people who love them, not their official championship names, which convey their titles and lineage. The dogs in this book are like supermodels off duty, showing us a personal side in a candid moment. What we love about these dogs is not their fancy parentage and titles, but exactly what we love about every dog in our lives; their quirky and wonderful dogginess.

Be the first to review “Show Dogs: A Photographic Breed Guide” Cancel reply