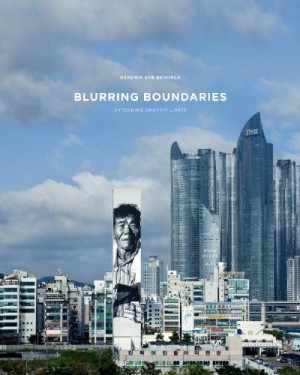 Hendrick Beikirch, or ECB, is seeking to change our perception of what graffiti is or can be by extending its limits. ECB is a German painter working on large-scale black and white or grayscale murals in public spaces worldwide. This new book is a compilation of the artists work, and provides insight into that work through both interviews and photographs of his process and execution. ECB looks for new approaches and blurs the lines between fine art and graffiti. The scale of his outdoor murals does not take away from the familiarity created in his portraits, often of anonymous faces, making the work accessible to the masses. The astounding scale he works at is made evident in one of his best-known works,  “Where there is no struggle, there is no strength.” Located in Busan, South Korea, the mural of a local fisherman is over 20 stories and measures 230 feet, making it Asias tallest mural. Photographs in the book show the work in progress, as well as its context situated against the backdrop of Busans skyscrapers. Blurring Boundaries is an intimate photographic look at ECBs process, body of work and the people who inspire him

It was way back in the 1980s when Hendrick ecb Beikirch held a can of spray paint for the first time. He wielded it like a vandal, leaving graffiti on trains until he took on the art establishment, replacing the metallic surfaces of public transport vehicles with canvas, wood, and concrete. by that point, the only link Beikirch maintained to his illicit past was his pseudonym: the three letters connecting his first and family names.

Today, Beikirch is most famously known for his remarkably personal portrait paintings, depicted on large-scale, sky-scraping murals and canvases that each tell a story.

And now, his first monograph “Blurring Boundaries” tells the story of the artist himself. The book covers Beikirch’s works over the years, from those created in his studio in Germany to the statement piece in South Korea’s mega city Busan, where he painted Asia’s tallest mural to date. In this way, Beikirch is blurring boundaries and extending the limits of graffiti to a yet unknown level.

Be the first to review “Blurring Boundaries: Extending the Limits of Graffiti” Cancel reply