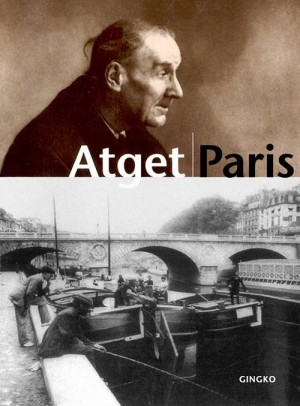 From 1897 until his death in 1927 Atget was photographer of Paris par excellence. This book brings together 840 of his images arranged district by district, neighborhood by neighborhood — it is the most prolific collection of his work ever published.

To turn the pages is to take an unforgettable stroll through the eerie, empty streets of Paris 90 years ago. It is a strange, largely unpeopled world where objects project an uncanny density: shoes dangling in a shop window, or the milk cart laden with cans and equipped with whip and reins but no driver. This is Atget’s Paris and in typical Atget style those humans that do appear are the humble tradespeople, the ragpickers, the prostitutes.

Although hailed by the surrealists for the poetic quality of his images, Atget refused to accept that he was an artist, claiming that the pictures he took were simply documents. He has become known as the first modern photographer and had the unique ability to inject a tragic quality into ordinary things.

As a special tribute this book has been formatted in the shape of a Parisian cobblestone.

Be the first to review “Atget Paris” Cancel reply