The Princess And The Pea

Home / Art / The Princess And The Pea 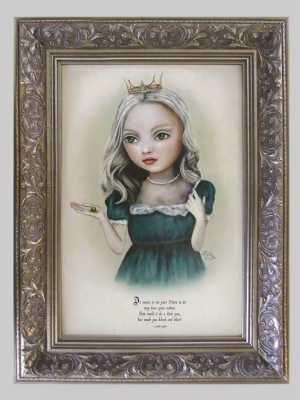 The Princess And The Pea

The Princess And The Pea by Lang Leav

Artist Biography:
The enchanting work of contemporary author and artist Lang Leav swings between the whimsical and woeful, expressing a complexity beneath its child-like facade.

Her imagination stretches across a variety of disciplines encompassing art, poetry and books. She is currently represented by New York literary agent Al Zuckerman from Writers House.

Frequently invited to exhibit at high profile exhibitions locally and overseas, she has since built up a loyal following of international fans. Her handcrafted book, Charlie’s Widow, was presented to iconic film director Tim Burton at the opening of his Wonderland exhibition at the Australian Centre for the Moving Image.

Lang is a recipient of The Qantas Spirit of Youth Award and was later granted a coveted Churchill Fellowship. Her fashion label Akina has achieved critical and commercial success, stocked in key boutiques around Australia and later in cutting edge Harajuku, Japan.

She has completed shows in several cities including Santa Monica for the renowned Copro gallery; who have worked with artists such as Mark Ryden and Audrey Kawasaki. She was hand-picked to exhibit in the landmark ‘Playboy Redux’ curated by The Warhol Museum and Playboy Enterprises; alongside contemporary greats such as Gary Baseman and Tara McPherson.

In 2013, Lang launched her latest book Love & Misadventure, published in the US by Andrews McMeel. The Amazon #1 Bestseller is now available from major bookstores worldwide including Barnes & Noble, Kinokuniya, Fully Booked, Waterstones, Periplus and Chapters/Indigo.