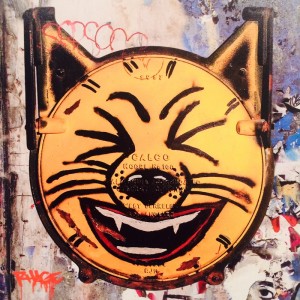 Artist Statement about L.A. River Cat:
When I was a child, riding in the car on long boring trips, I always looked forward to the Los Angeles River Cats. The Los Angeles River drainage culverts have these steel doors that open with the force of flowing drain water. They are round and have triangular hinge support plates. They look like cats. In the early 60′s, artist took to painting cat faces on them. Later, an artist named Leo Limon, took it upon himself to care for the cats and keep them in good condition as well as adding some of his own designs to the culvert covers. I think it was in the 80′s that Caltrans put up higher fences and shrubs to cover the view from the 5 freeway due to accidents from drivers trying to catch a glimpse of the beloved cats. One of my favorite aspects of the works was that down the freeway a little further, someone had painted the face of a mouse who was obviously on the look out for any cats. One of the wonderful fleeting moments from my childhood. Esoteric perhaps, but definitely meaningful. This piece is an homage to the many river cats artists and to Leo Limon who is their selfless caretaker.
- R.Hage

Be the first to review “L.A. River Cat Prints On Wood” Cancel reply