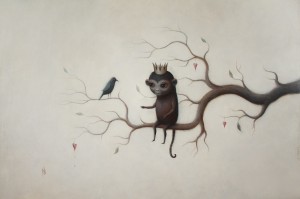 Current Exhibition at Flower Pepper Gallery: The Language of Nature from August 26th to September 20th, 2017

Artist Biography:
Paul’s mythical characters are allegories of human emotion. Against a landscape inspired by the natural surroundings of his native north of Scotland, narrative threads are woven around the interactions between his anthropomorphized figures, often greatly inspired by his three children, the purity, innocence and curiosity of their being and the infinity of their imagination. His paintings are characterized by a warm, muted palette with a textured and aged appearance, reminiscent of Italian fresco painting, in a space free from the boundaries of time or culture.

Paul lives and works in the north of Scotland. His paintings are shown in notable galleries in the UK, Europe and USA and have gained him international recognition within the ever expanding New Contemporary Art and Pop Surrealism movements.

“From a world of extended metaphor and gentle strangeness, Barnes captures our imaginations and depletes our adult resistance to fantastical possibility.
The artist’s work is informed by the legend and magic of folklore; an influence apparent in this childlike imaginary of gentle, foggy, creatures in half waking dream states.”
– Marieke Treilhard

“International artist Paul Barnes effortlessly combines hauntingly adorable creatures with a historical aesthetic that is rich with folklore and depth. His subdued color palette on textured plaster is immediately recognizable and unique. He brings tales and myths from long ago to life and appeals to our inner child, fascinated by these eerie legends.” – by Emiko Woods for Press Release of The Language of Nature at Flower Pepper Gallery

Be the first to review “Bye Bye Blackbird” Cancel reply