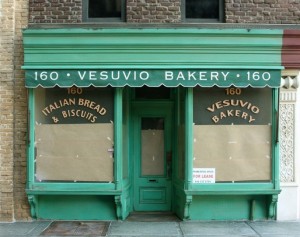 Nunzio and Jennie Dapolito, immigrants from Naples, opened Vesuvio Bakery in 1920. That same year they had a son, Tony. As a boy, Tony delivered bread on a horse – drawn wagon. After his parents died, Anthony took over the business and ran it until his death at the age of 83. Mr. Depolito was a widely known community advocate, and the bakery served as a meeting spot.

The business was sold and while it sat unoccupied, with paper in the windows, many in the community began to protest against the possibility that the new owner would destroy their beloved, green storefront. The new owner has honored the desires of the locals and this iconic landmark storefront remains.

Be the first to review “Vesuvio Bakery” Cancel reply