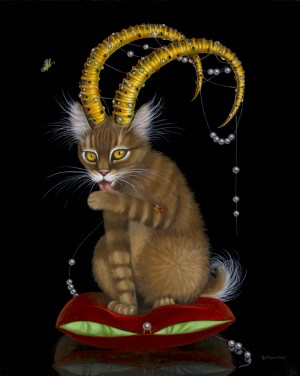 Artist Statement About This Piece:
“The Mountaingee – he is a magical hybrid between a cat and a mountain goat, but he is also a royalty as symbolized by the gold and jewels. He is a powerful and magical breed that can never be fully domesticated but if treated nicely by humans will always come back to check up on them. It’s hard to give a full account to his life as he is a very elusive creature that can sometimes just descend from the foggy mountain tops and then disappear just as mysteriously.” – Leila Ataya

Be the first to review “Mountaingee” Cancel reply