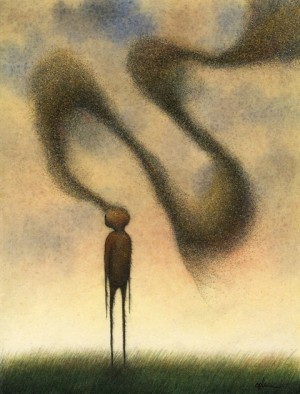 Artist Statement and Biography:
In 2005 I was working at a record store in Seattle. I had been working retail ever since I dropped out of art school in the mid-nineties and after a decade of working to pay back that one year of college I was dreaming of an escape. I pretty much lived exclusively for the nightly retreats to my decrepit drafting table where I was free to spend hours hiding away in a vivid watercolor washed world surrounded by the warmth and comfort of my unusual creations. After years of existing like this I eventually gained the courage to take a chance and quit my day job to pursue my art full-time. Obsolete world is a name that was originally taken from the 1961 Twilight Zone episode “The Obsolete Man” where in a future totalitarian state, Burgess Meredith’s character (a librarian) is a man put on trial for the crime of being obsolete. I had always loved that episode and I pictured a similar scenario in which the make-believe creatures of childhood suffer a similar “crime” as one grows old. I took to the task of conserving these victims of consequence and created “Obsolete World” as a place where my own creations could safely while away the hours.

2012
November-Get The Lead Out IV group show at The ARTtery in Costa Mesa, CA
August-Signals End on the project wall at C.A.V.E. Gallery in Venice, CA

2010
October-”Hallows Eve” at Tasty Gallery in Seattle, WA
August-Group Show, “Get The Lead Out” at Swoon Gallery in Los Angeles, CA
March-Group Show, “Glass, Cinder and Thorns” at 323 East in Detroit, MI
February-Solo Show at Doma Cafe and Gallery in New York, NY

2007
December-Solo Show at Frame Up Studios in Seattle, WA

Be the first to review “Internal Static Reduction” Cancel reply