Beauty Is In The Street

Home / Books / Beauty Is In The Street 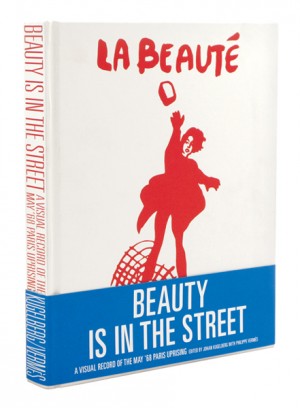 Beauty Is In The Street

A Visual Record of the May ’68 Paris Uprising

In May 1968, thousands of workers and students took to the streets of Paris, provoking an unprecedented wave of strikes, walkouts and demonstrations. The confrontations between police and protesters led to a general strike of eleven million workers that brought the country to a virtual standstill and nearly toppled Charles de Gaulle’s government. The faculty and student body of the Ecole des Beaux Arts were among the strikers, and a number of the students met spontaneously in the college’s lithographic department to produce the first poster of the revolt, which bore the declaration “Usines, Universités, Union” (“Factories and universities unite,” loosely translated). From this initiative was born the Atelier Populaire (or “popular workshop” ), a collective of print shops that produced hundreds of posters to encourage the protestors and to report on police brutality. These posters included many of the often Situationist-inspired mottos for which May ’68 is remembered today, such as “Be young and shut up” and “return to normal” (accompanied by a picture of a herd of sheep). Beauty Is in the Street reproduces more than 200 of these posters in full color, which have since become landmarks in political art and graphic design. Also included is a thumbnail index of an additional 411 posters; a wealth of archival documentary photographs and new translations of firsthand accounts of the clashes between the students and strikers and the police, many published in English for the first time; and an introduction by Philippe Vermès, one of the founders of the Atelier Populaire.