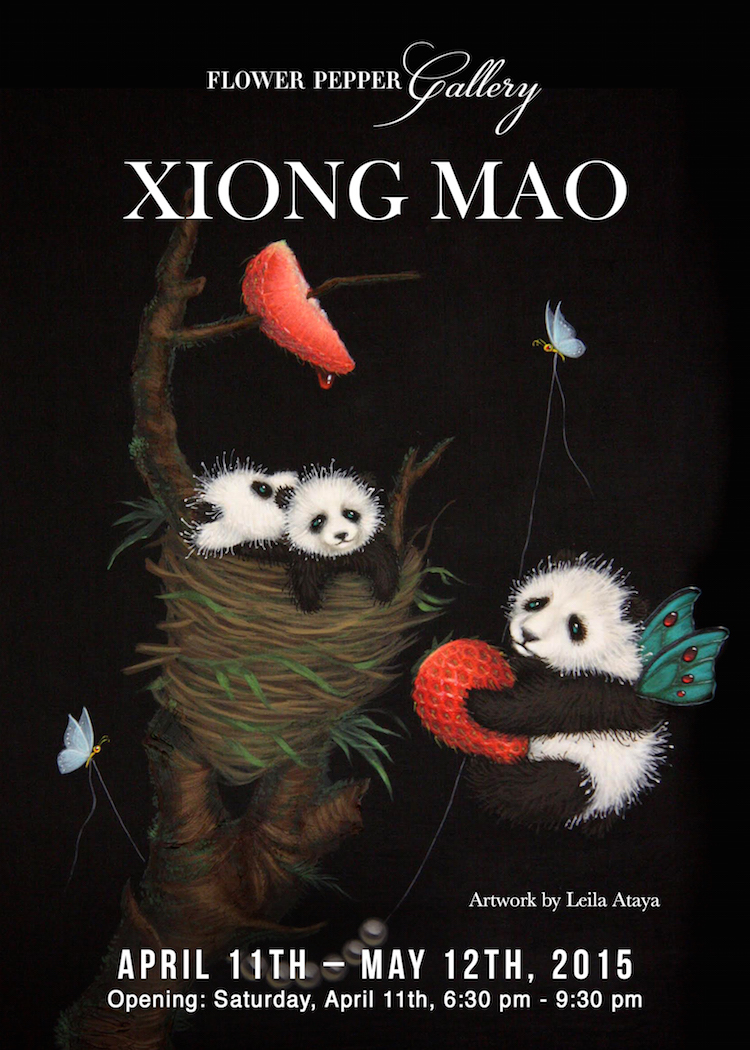 On Saturday, April 11th, Flower Pepper Gallery is pleased to present Xiong Mao, a collection of works inspired by China’s national treasure, the Giant Panda. Residing largely in the mountain ranges of China’s Sichuan province, giant pandas hail from the same province as the spicy yet sweet spice, Flower Pepper, which is the gallery’s namesake. These beautiful banded bears have a paramount place in Chinese culture. Revered as a symbol for friendship and accord, pandas are credited with some of the first cultural exchanges between the People’s Republic of China and the United States, coining the term, "Panda diplomacy".

“Xiong Mao” directly translates to "Bear Cat”, which has been the focus of Chinese mythology and folk lore for generations. Believed to possess mystical powers capable of warding off natural disasters and evil spirits, the panda, or bear cat has long been a great source of inspiration and curiosity. While the exact reason for the name “Bear Cat” is unknown, many believe it is because of the panda’s cat-like eyes, which make it a stand out from its other bear relatives. Each artist participating in this exhibition has been invited to create one piece portraying their interpretation of either the beloved giant panda, or a bear and cat. “Xiong Mao” will be Flower Pepper Gallery’s second panda inspired exhibition.

The reception is open to the public and on view until May 12th, 2015. For purchase inquiries, or to request a VIP preview please email contact@flower-pepper.com

Amy Van Gilder was one of the earliest designers in the NY Muppet Workshop, hired during the first season of The Muppet Show. She left Henson for a time in the early 1980s to start a family, but returned to work on Muppets Tonight. She also had a cameo alongside Jim Henson in The Great Muppet Caper, as a patron of The Dubonnet Club. She was later hired by The Walt Disney Company in the Imagineering Department, where she currently helps with integrating the newly acquired Muppets property into their theme parks. Her achievements there include design and theming concepts for Lucky the Dinosaur, the first in a series of free-roving Audio-Animatronics in Disney’s Living Character Initiative, which would later include the Muppet Mobile Labs. Amy Van Gilder’s children are journalist Sonia van Gilder Cooke and photographer Bartholomew Cooke. Sonia van Gilder Cooke mentioned her mother as her “role model” in an interview with The Sunday Times of London.

Pictured here is Nesting Season by Leila Ataya for the exhibition.