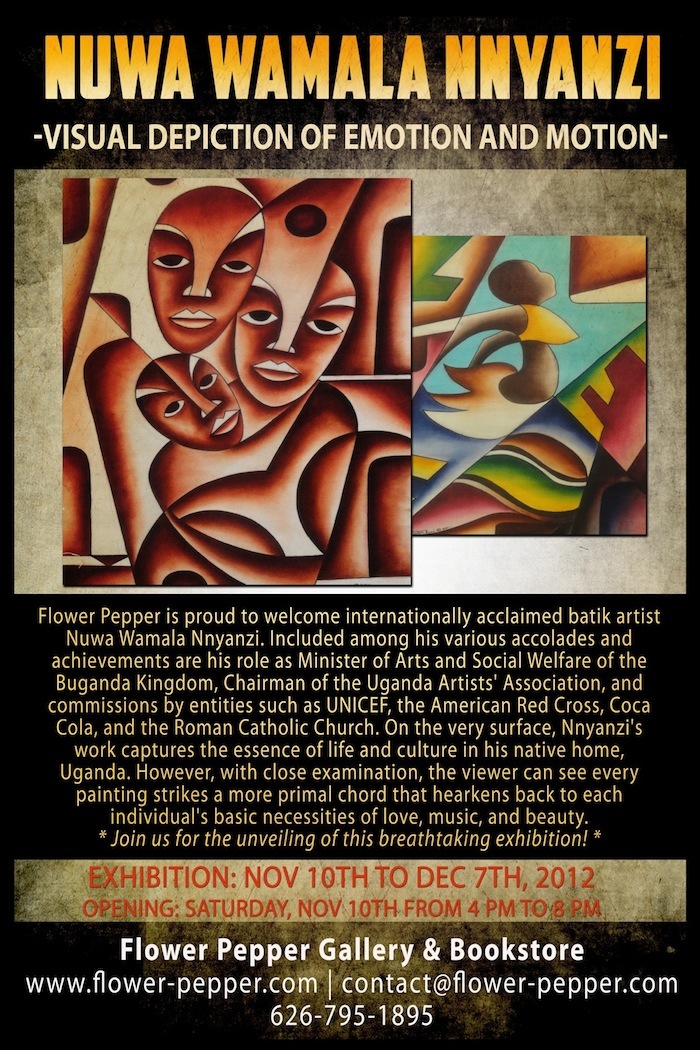 VISUAL DEPICTION OF EMOTION AND MOTION

Flower Pepper is proud to welcome internationally acclaimed batik artist Nuwa Wamala Nnyanzi. Included among his various accolades and achievements are his role as Minister of Arts and Social Welfare of the Buganda Kingdom, Chairman of the Uganda Artists' Association, and commissions by entities such as UNICEF, the American Red Cross, Coca Cola, and the Roman Catholic Church. On the very surface, Nnyanzi's work captures the essence of life and culture in his native home, Uganda. However, with close examination, the viewer can see every painting strikes a more primal chord that hearkens back to each individual's basic necessities of love, music, and beauty. Join us for the unveiling of this breathtaking exhibition!

Nuwa Nnyanzi is a visual arts practitioner/consultant, who has successfully developed personal skills in multi-media painting and graphic design. He has developed a distinct individual technique to the level that has made it possible for some of his works to grace walls of significant places including, The Vatican, The White House, State Houses of Uganda and Kenya, Museum Fur Volkerkunde in Frankfurt, Germany, universities and Coca-Cola International. His work also appears on magazine/book covers, among them; The 1999 World Health Report by the WHO and the UNICEF greetings cards collection. Among notable collectors of his art are: The Uganda and Kenya governments, University of Notre Dame, Gems of Africa Art Gallery, The Kabaka (King) of Buganda, Uganda, Mrs. Roselyn Carter and Mrs. Hilary Rodham Clinton Esq., former First Ladies of United States of America.

Nuwa’s art is an expression of his inner feelings, an interpretation of experiences of others and a celebration of the talent bestowed upon him by the grace of God, because he never attended a formal art school. He endeavors to paint in such a way that those with feelings may be touched. He has translated greater than thirty years of artistic/cultural expression into a therapeutic agent/instrument for inspiring children (especially the traumatized, disabled and or underprivileged) to visually pour out their inner feelings in order to ease the emotional torment that threaten to ruin their future.

Senior citizens at Goodwin House based in Alexandria, Virginia, and people with parkinson’s disease in London, UK are among beneficiaries of his batik art workshops and slide/talk presentations. His work is widely aptly described as “The Art That Touches The Heart” because of his ability to capture motion and emotion by using simple yet definite lines to create forms that are complemented by the use of color that articulates light and shadow to make statements, which often invoke a responsive chord among viewers. He paints in such a way that those with feelings may be touched.

He has organized and participated in several national and international (major as well as medium) solo and group exhibits. Some of the participants included traumatized/disadvantaged children such as orphans and formally abducted children. His art has also been used in art therapy and also to raise funds for worthy causes. He also organized and managed music and drama shows to create more awareness and appreciation of our cultural heritage through local talent within Uganda.

Nuwa presents talk and slide shows on Ugandan arts and culture to audiences, including universities, colleges, high schools and other special groups in UK, USA and South Africa. He developed a program of study that is structured to develop in students an understanding of the meaning, both past and present, of art in African societies with emphasis on Uganda. Art majors and others acquire comprehensive experience in use of materials and technique, while gaining confidence in their ability to integrate tradition, knowledge and creativity.

He has established and successfully runs Nnyanzi Art Studio, a prominent studio/gallery in Kampala, Uganda. It deals in and promotes contemporary Ugandan arts and crafts domestically and internationally. He twice served as Director, Uganda Tourist Board. He served as minister in the Buganda Kingdom, Uganda, where he was responsible for internal affairs and the arts. Buganda Kingdom is a centuries old monarchy and has a population of over 6 million people. Additionally, he successfully chaired committees that were responsible for protocol and security during the historic coronation of Ssabasajja Ronald Muwenda Mutebi II, the 36th Kabaka (king) of Buganda in 1993 and in 1999 at his royal wedding, where over one million people attended the reception. Nuwa served as Chairman of Uganda Artists’ Association, President of the Rotary club of Kampala West, District 9200, 2000/2001; and as Chairman, Patron of Central Branch of the Uganda Red Cross Society 2003 to 2005. He is currently the Vice Chair of Uganda National Arts And Crafts Association of Uganda (NACAU).

"My art is an expression of my inner feelings, an interpretation of experiences of others and a celebration of the talent bestowed upon me by the grace of God. I endeavor to paint in such a way that those with feelings may be touched."