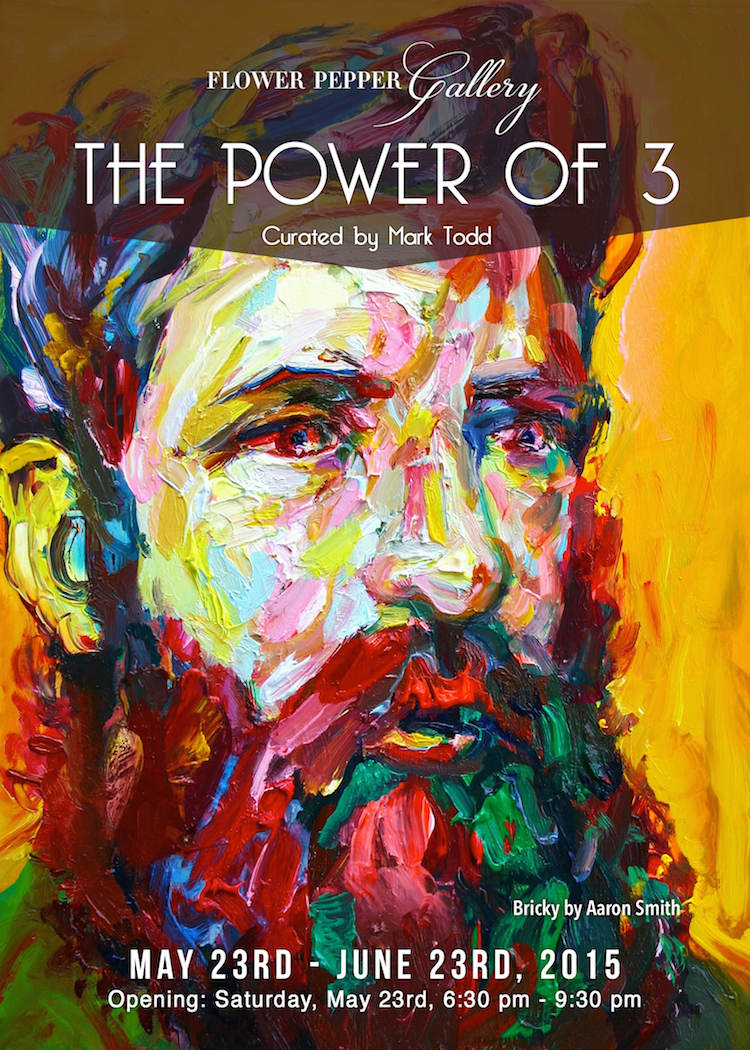 On Saturday, May 23rd, 2015, Flower Pepper Gallery is pleased to present The Power of 3, curated by Mark Todd. This will be Mark Todd and Flower Pepper Gallery’s second collaboration, a follow up to the wildly successful 40 x 400 that took place at the gallery in January of 2015. For this exhibition,noted illustrator, curator, and professor, Mark Todd has brought together a power house group of artists, and invited them each to create 3 pieces, one 6”x 8”, one 9” x 12”, one 12” x 16”, all on Trekell wooden artist panels. The predetermined sizes will provide the unifying element of the show, while allowing the artists the creative freedom from being confined by any other restrictions or limitations.

“When I was thinking about this group show and how I could bring a group of diverse artists together into a single space, I kept coming back to the idea of 3, of pyramids and triangles, artwork stacked from large to small,” says Mark Todd, “There is something about the power of 3. Many of us remember the old Schoolhouse Rock anthem, ‘Three is a magic number’, along with the endless popular references to the significance of 3 in literature and films.”

Each collection of work will allow the viewer a glimpse into the mind of the artist and their vision. Mark Todd says, “The idea is that when you see a work of art from a particular artist that moves you, it's exciting. When you see another, and yet another, each communicating to each other but also standing on their own, it's inspiring. You get a better sense of who the artist is and perhaps the stories they want to tell.”

About the Curator: Mark Todd’s work has appeared in books, on products and in countless publications such as The New York Times, Entertainment Weekly, and McSweeney's. His latest picture book, Food Trucks! was released this Spring from Houghton Mifflin Harcourt and is available everywhere. Under the name Funchicken, Mark, and his wife and fellow artist, Esther Pearl Watson, have co-written and illustrated a series of zines and books including Whatcha' Mean, What's A Zine?, a guide to producing zines and mini-comics. Mark and Esther Pearl are also the curators behind the Post-It Show, held annually at GR2 in Los Angeles, CA.

The reception is open to the public and on view until June 23rd, 2015.

For purchase inquiries, or to request a VIP preview please email contact@flower-pepper.com

Click here to see some photos from the Opening

Big thanks to Anise Stevens for featuring the exhibition on Cartwheel Art! Click here to read the article.