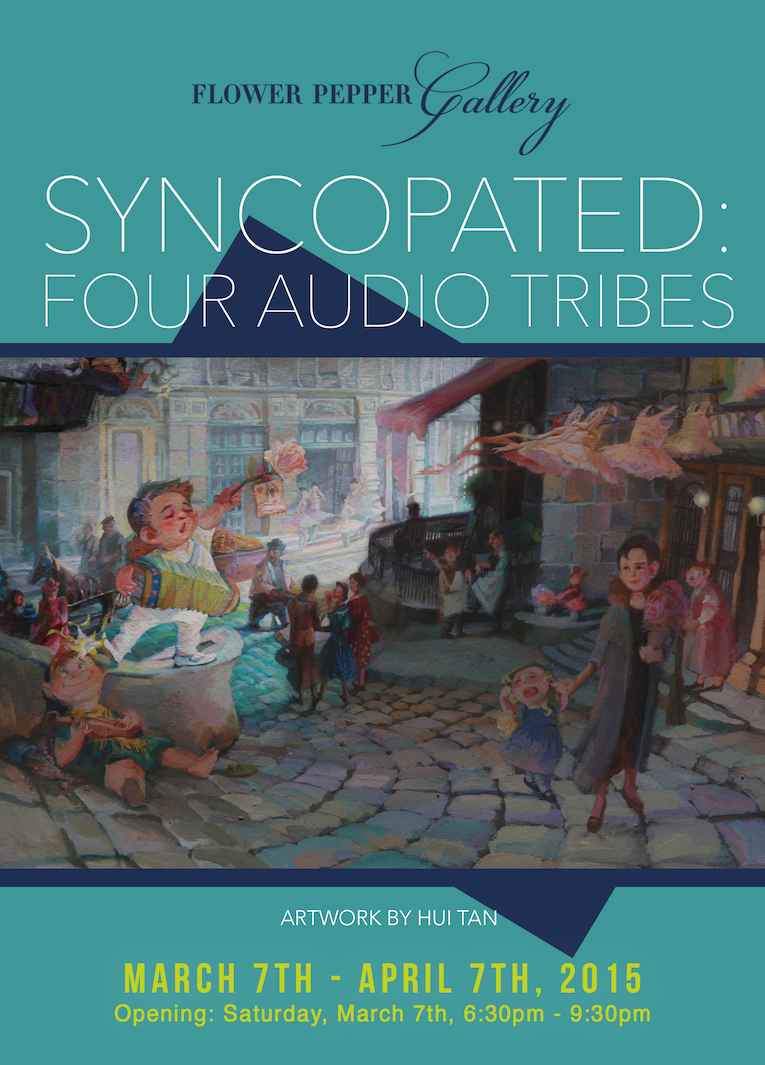 Syncopated: Four Audio Tribes joins the vastly disparate experiences of artists from different cultures under the singular umbrella of music. Not necessarily a visual interpretation of sound, the works of each artist recalls the culture most closely connected to the age, creed and economic background that informs each artist's identity.

That each seems particularly gifted in capturing the essence of audio is directly curatorial.

Hui Tan has long been adept in capturing an almost folkloric element inherent in her characters, which are predominantly the child students of the Peking Opera, and the many lesser known institutions that dot the vast Chinese countryside.

Jaclyn Alderete uses classical techniques to capture timeless themes, and in this body of work it is the concepts and not the brushstrokes that warrant the term "impressionistic."

Mark Melchior paints the Sunset Strip as he remembers it–not as a glam rock paradise, but a culture in the throes of decline. Iconic locations of the 80s and 90s, long gone but not forgotten, are immortalized in high contrast and vivid colors through the grunge laden lens of post-Warhol demystification.

Syncopated is an aggregate of multiple genres from the North, South, Far East and West, and like visiting an old record store there's a global journey within four walls.

Amy Van Gilder was one of the earliest designers in the NY Muppet Workshop, hired during the first season of The Muppet Show. She left Henson for a time in the early 1980s to start a family, but returned to work on Muppets Tonight. She also had a cameo alongside Jim Henson in The Great Muppet Caper, as a patron of The Dubonnet Club. She was later hired by The Walt Disney Company in the Imagineering Department, where she currently helps with integrating the newly acquired Muppets property into their theme parks. Her achievements there include design and theming concepts for Lucky the Dinosaur, the first in a series of free-roving Audio-Animatronics in Disney’s Living Character Initiative, which would later include the Muppet Mobile Labs. Amy Van Gilder’s children are journalist Sonia van Gilder Cooke and photographer Bartholomew Cooke. Sonia van Gilder Cooke mentioned her mother as her “role model” in an interview with The Sunday Times of London.