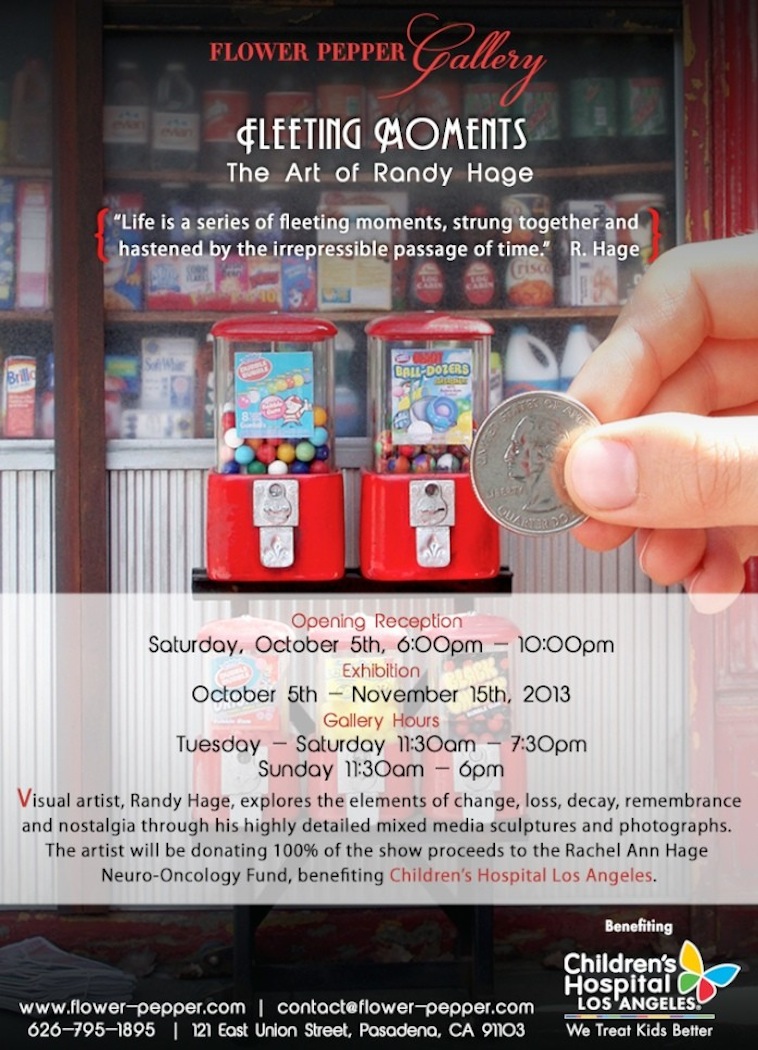 “Life is a series of fleeting moments, strung together and hastened by the irrepressible passage of time.” - R. Hage

Unlike his NY Storefront illustions, Randy Hage inside and out is one of the most authentic and humblest of people. To fully understand the extent of Randy Hage's compassionate heart, watch this touching interview with ABC Channel 7's David Ono

"A local artist is using his incredible talent to combat Children's brain cancer in memory of the little girl he lost.

The Atlantic Cities: The Secret Life of New York Storefronts, in Miniature by Sarah Goodyear

Curbed: It's A Small World by Jeremiah Budin

Flower Pepper Gallery is pleased to present it's upcoming solo exhibition Fleeting Moments - The Art of Randy Hage. Los Angeles based TV/Film sets, models, and props expert Randy Hage turned visual artist, primarily presents miniature New York storefronts from a conceptual and individual perspective. From over 10 years of photographic documentation of mom and pop businesses, of which only 40% remain, the master of observation transforms humble materials into photorealistic sculptures.

This year’s exhibition is in support of a special cause close to the artist's heart: The Rachel Ann Hage Neuro-Oncology Research Fund, a charity to honor the loss of a cherished daughter. In an effort to capture the human experience of loss, Hage has created this body of work to honor and remember the soul of the people that formed these NY districts. The artist immortalizes these mom and pop storefronts that have disappeared due to greed and gentrification by returning his viewer to the once unique streets that he captured in his lens.

The art of Randy Hage is not just about replication, but also about harnessing the history and voice of the architecture. From peeling paint, rusted fire escapes, and even tell tale signs of teenage loitering, Hage creates the narrative of each business that was. This exhibition is particularly unique due to the addition of some local LA cultural icons such as the LA River Cats. Following a 1/12th scale, Hage places the viewer in a voyeur’s perspective. He allows each to join him in the illusion of reality in observing the layers of preserved and sedimentary architecture that forms the true spirit of both the New York and Los Angeles story.

Visual artist, Randy Hage, has always been fascinated by the character and often overlooked beauty of aging structures. In the late 90s, he began photographing the cast iron facades in the SoHo area of New York as possible subjects for future art projects (The cast iron and brick structure on this site is a product of that original research). His interest soon moved to the unique street level Mom & Pop storefronts with their hand painted signs, layers of architecture, wonderful patinas and intriguing history.

A big thank you to everyone who came this weekend to share in the heartfelt art offerings of Randy Hage at the Flower Pepper Gallery. Thanks to you, nearly all of Randy’s pieces sold out two weeks prior to opening night, which means a fantastic donation for Children's Hospital Los Angeles.

At special request by the many Randy Hage fans who were unable to be present this past Saturday evening, we would love to invite you to a second chance meet and greet with the master of observation himself. Randy has graciously agreed to share and unveil some of his processes as well as give you all a chance to converse and gather insight into the workings of his creative mind.

This event is open to the public and all ages are welcome to participate in this open discussion with the phenomenal and generative artist Randy Hage. We are very excited to be able offer this “Meet The Artist Day” event and hope to see you there!